Ready, set, run: breaking down the structure of Facebook advertising

What two steps come before you run? Get ready and get set. The same steps need to happen before running a Facebook ad. You have to get ready with a campaign plan and get the ad set up. Then, you can start running the ad!
Facebook advertising might seem simple because you can decide to run an ad on Facebook and actually start running it the very same day. But it really does require more planning than that. You have to make strategic decisions about marketing objectives, targeted audiences, budget and ad design. In Facebook Ad Manager, the ad structure is broken down to help you think strategically about each of those areas, from campaign to ad set to ad. Here’s the breakdown on each one: 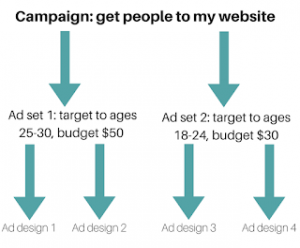 There’s a lot more detail to each step, but hopefully, this helps explain the way Facebook structures their advertising. These are the things you need to decide before jumping in and running a Facebook ad. So get ready, get set and then run your Facebook ad!